Book Review of “If Wishes Were Curses” 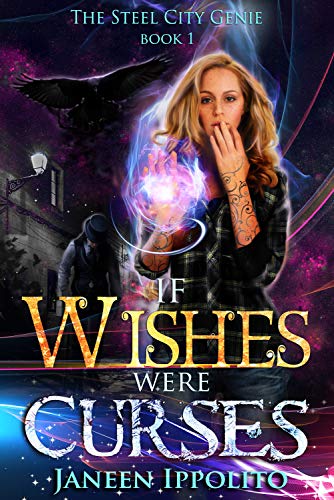 First, from the “Back of the Book”:

“So I accidentally killed a shifter. On purpose.

With genie powers I shouldn’t be able to use, thanks to my curse-mark.

In my defense, the damn grizzly was threatening civilians and might have been a vampire as well. Pittsburgh is safer without him. Only the Fae court doesn’t believe my story, and the shifters are out for blood.

Now I’ve lost my job as a romantic investigator, and I’m on death row. My only hope is an oddly outgoing vegetarian vampire lawyer who seems strangely familiar. Too familiar.

Almost like we’ve met before, and this whole thing was a set-up to take us both down.

Wishing won’t get us out of this mess.
But my forbidden wish magic just might.”

Oh wow did I love this book. 5 Stars, easy. I might have stayed up until 4am finishing this book… 😉

I love this. It’s got snark, magic, and a great cast of characters. On brief word of warning: This book would be rated about PG-13 (about the same as Star Trek. It does mention “panties” “orgasm”, and “sh*t”… come to think of it, in that order, even…)

I identified with the main character right away: she’s cursed (literally,) but still tries to make the best of life and do good in the world. As it says in the “back of the book”, Allis has to kill a crazed bear-shifter in self defense. Since she’s a cursed half-breed, no one but her half-brother believes her, and all her friends turn her away.  She’s alone and crying on a park bench… oh, the feels!

Then she meets Cid (again?? <spoilers>) and things get fun. I love power up scenes and OP (Over-Powered) characters. When done right, you just laugh manically with glee… and this is done right (the character even laughs manically with glee… more on that in a bit.) I love how Allis gets all these random, weird thoughts (Am I the only one who also has those?), and they even play into the plot a little.

Jack is a female Kitsune who’s all sorts of awesome. She’s also a redhead 🙂 (well, most of the time…) I wasn’t sure if I’d like her after <spoiler>,  but then <spoiler> happened. Anyway, she’s awesome, protective, and a bit of a gruff counterpoint to Allis’ snarky, bubbly, scatterbrainedness. (that’s totally a word, right?)

Gideon is an adorable otter shifter, and is a great supportive, yet teasing brother.

Cid is mysterious,  powerful… and there’s something familiar about him….

I love the humor. Plenty of snark. Allis can’t seem to keep her mouth shut, and she has all these wonderfully random thoughts flitting around all the time.

Okay, so this was rambling and whatnot, but I stayed up till 4am until I finished it… and just bought book 2. I love this world, it was fun “I laughed, I cried… It moved me, Bob.”